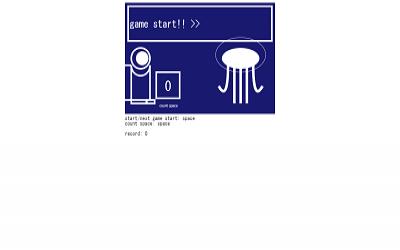 You don't have to do anything other than the space key

Victor Debone: I felt a bit like playing "Who wants to be a millionaire"! It took me some time to understand what the game wanted from me, but then I figure out that the count downs and messages were just trying to give me the pace of a television show, good touch! I also pressed space too many times once, and I couldn't rewind the number. I learned that maybe that's why there was an extra timer after the text. I should count and THEN press spaces :) How to improve? I missed a bit of the animations of similar tv shows when the answer is correct or wrong. I wanted to have some reward for getting the correct answer :D

Jupiter Hadley: Sadly, I have no idea how to actually find the answer of the numbers.

Ahmed Khalifa: First of all, congratulations on finishing a game for the JS13K jam. I love your different interpretation of the word space to be counting the spaces in a stream of text. The idea is good reminds me of some of Mario party games about counting the toads, etc. You could get inspired by that and make more than one stream to run, or having more than one space after each other to increase the difficulty over time. Maybe you could also add some context to the game which will give you an understanding about why I am trying to count the spaces. You could also evolve that game to be like a cookie clicker style by allowing the user to buy auto counters which have accuracy of getting it correct and the more you have the less you need to do. Or some of them to count different streams. It could be even strategic type of game like a tower defense :) I think there is a lot of possibility that can be done with your game :) Thanks for creating it and I hope you would continue exploring it :)