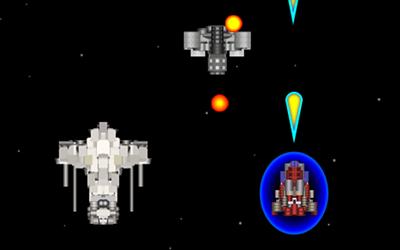 Survive as long as you can in this shoot'em up game. 12 increasingly difficult enemies and boss fights!

Ania Kubów: A great shooter game that is pleasing to the eye. I enjoyed how quick and smooth the movements of the players’ ship were. It was refreshing to see the ship controlled by the mouse - it’s rare you see a game like this controlled in such a way. It was very satisfying to play.

Björn Ritzl: I like shoot'em up games and this one was pretty good considering the restrictions. I would have preferred keyboard controls as I found mouse controls a bit imprecise. The way the enemies exploded was a nice touch and I liked the parallax starfield in the background. I do think you could play a bit more with colors of the stars to make the ones closer stand out more (make them brighter). It would also have been nice if I could pick up the bomb power-up and use at my convenience instead of detonating it immediately.