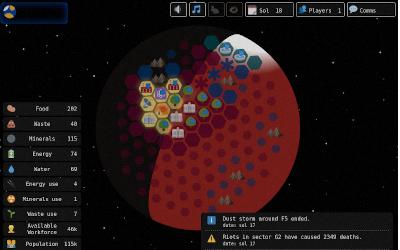 We fucked up. Earth is dead. Time for planet B. The ultra rich wanted Mars all for themselves, until they realized you can’t run a city with just CEOs. The goal of the game is to create a functioning colony while constantly receiving more refugees from Earth.

Game works best on desktop; phones under 7in might struggle to fit all the information on the screen.

In this global co-op game you’re one of Mars’ managers. Multiple players join in the same server to help deal with every day tasks. You can also play in solo mode, but your game won't be saved if you leave.

🔹 Build houses for the refugees and move them there; you can exceed the house's capacity at the risk of residents rioting;
🔹 Build buildings and collect resources from them; some buildings can only be built on appropriate locations (red = open plains, blue = rocky are, white = glacier).

You will face several problems:

🔸 The more people are crammed together, the more likely riots emerge. When riots start, people will die.
🔸 Ditto for lack of food
🔸 Dust storms will cut communication off with that area

There’s a chat function to communicate with other people currently online.

If the game colors annoy you, you can try if color blind mode helps. If the game performance is bad, you can press the 🐇 button to disable some visual effects.