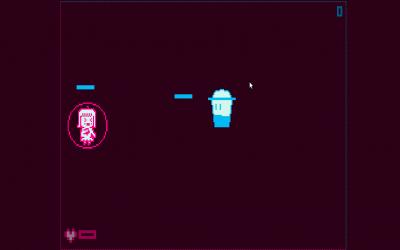 Description
Meet Koko! Your average girl with the power to make a barrier around her and absorb bullet's energy when it hits the barrier. She can also use the adsorbed energy to fire back at the enemies.

Anonymous: First of all, I want to congratulate you and thank you for being able to make and finish a game with that small footprint that also includes a small amount of SFX and nice pixel art. What was good: - The game is solid in movements and art and responsiveness - The concept is interesting mix of when to defend and when to shoot which can be improved and remind me of Catus game "Clean Asia" What can be improved: - The game in the current state terminates after killing the second two enemies which don't give me enough time to play the game and enjoy the mechanics - In the current form, there is no drawback for holding the barrier and you can hold the barrier forever while shooting so you won't get hit. You can try to fix that point by having the barrier overheat after awhile if you are holding it forever and you lose all your shots. - Also, the player is able to move everywhere, while the enemies are only able to move up and down and shoot toward the left (not towards the player). That makes half of the playing field not useful as the player now can hide behind the enemies without even getting hit. It can easily be solved by making the enemies at the extreme right or not allow the player to move a lot toward the right.

Pedro Fortuna: Basic idea of the game has potential ++ Thrown type errors and broke down when spawning a second enemy -- When the console is open, the girl vanishes -- Game over message is ugly :( -- No instructions on how to build and run the application -- Constantly doing GET /images/enemy_bullet.png. Why isn't it cached? --