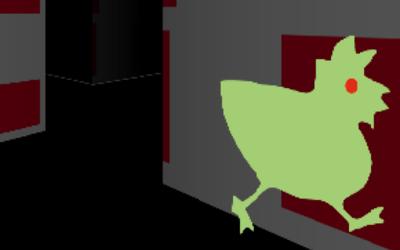 It is 1920. You, Marcel Proust, have been appointed Visiting Professor of French Literature at Purdue University.
To your horror you discover that underneath its' placid Midwestern exterior, the university has become the lair of
the mad scientist Professor Melmoth who is hellbent on conquering the world with his army of mutant robot chickens.
Before you can warn President Harding, you are knocked out. You wake up in the Richard and Patricia Lawson Memorial
Death Pit with 12 chickens. Luckily they are not very intelligent. If you can make them run into each other or into
walls they will explode. Kill them all and you can save the world.

Diego González: I seem to move a million miles an hour - I think an event is not firing as intended. Cool 3d maze rendering, though!