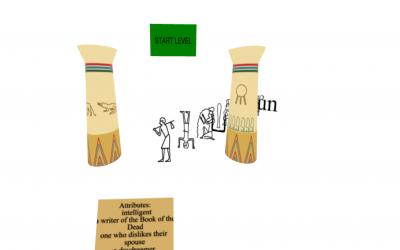 The game is a cross-platform WebXR application made primarily with the A-Frame platform.
It is played with a VR headset, without a need for hand controls.

This is a parody of the game "Papers, Please".

The player finds out that he has died, and that he has been transported into the afterlife, which is modeled after the religious Ancient Egyptian view. He is greeted by the High god Amun-Ra, who makes him the new God of Death.
As The God of Death, the player receives instructions from Amun-Ra in the beginning of each round, which explain which human deserves to go on to Heaven, or be eaten by the monster alligator chimera Ammet.

In each round, there are only 3 wrong-attempts before the game fails the player.

There are a total of 10 rounds in the game.