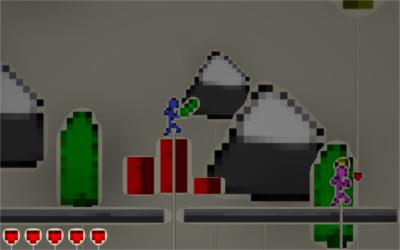 This is a platformer game, with the goal of saving the princess from the 13 vicious enemies.
You have to fight them in increasing difficulty order to finally reach the princess.
All this backwards though...

Anonymous: Interesting concept, I liked the paper figures and how the graphics look like on that. I had trouble in the beginning to understand what was going on because I thought I was coming back to the same level every time. Once I read the instructions, I could get it. Interesting thing thought was to make the player actually heal the enemies that you've killed, because everything should be backwards right? So you went back to the level, and she starts dead.

Jupiter Hadley: I liked the concept of the graphics style, but it was so very laggy. I also had no idea where to go after the first enemy died.