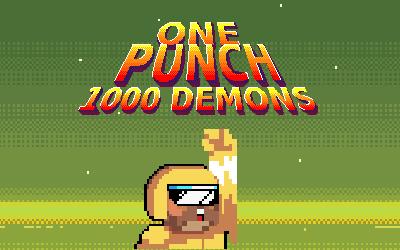 Story:
... far far away from our Milky Way galaxy, your space ship is under attack by gang of 1000 Demons.
Your mission is to kill all those 1000 Demons before they destroy your space ship.
Show them your Power of One Punch, like they have never experienced it before.

Jupiter Hadley: I like the animations and background a lot, though I feel it starts really really slowly - with lots of dead air and waiting on demons.

Ania Kubów: I enjoyed the secret bonuses that came with this game and having the demon countdown was useful to have. It would be good to have more understanding on what qualified to get a bonus of the Banana Suit Player multiplying or getting a laser etc. Nice work!

Michelle Mannering: - I love One Punch Man - music is awesome - good to have controls at the bottom of the screen - would be great to have a "tutorial" screen overlay, before the player clicks "start" to start the game instead of just starting the game on load - 8 bit graphics are really cool - story and lore is great. nice work