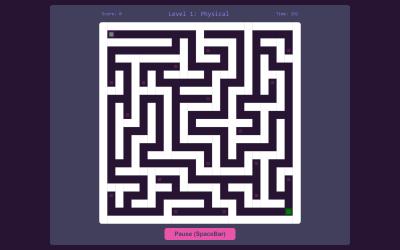 In Network Hell, you play the role of a request traveling back up the OSI Stack to try and connect to the outside world. Move quickly and pickup packets along the way to provide data to your consumer with the least response time.

Spartez Team: The game was rather simple. I really did hope for some labyrinth generation algorithm in code. Nice idea about selling theme with osi stack. Movement was a little too fast and without any acceleration/decceleration. At first I was overshooting, luckilly holding both keys (forward and turn) will allow you to turn Also I have no idea should I take packets or be fastest and even if there is really connection between both. So I guess this is high score attack game.

Jupiter Hadley: I liked the music and mazes! I do wish that the game gave more of a penalty for lack of packets collected.