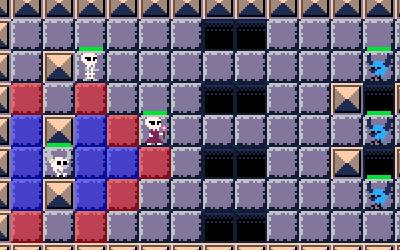 You play as an undead necromancer and have to defend your dungeon from adventurers. Every time an adventurer or their summons are slain, they turn into bones that you can resurrect into your own minions.

Controls are all mouse, like in turn-based strategy games like Fire Emblem. Bones adjacent to the necromancer turn into minions at the start of your turn.

The game has most of the core loop done, but it's missing several mechanics and polish, like audio, animations, and a spawning system for the enemies. The idea was to survive for a certain number of waves in order to win, and each time you played, the dungeon layout would be randomly generated.

Furthermore, I had plans for the Decentralized category where you could "claim" a dungeon and have it saved in NEAR, either as plain data or as an NFT, and you could start a new game with any dungeon layouts you own.