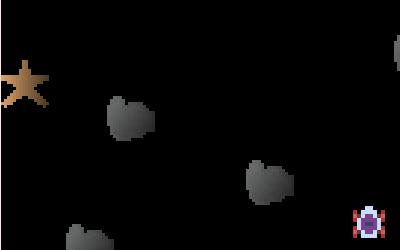 Controls:
Control the moon buggy with the arrow keys (Up accelerates, Down decelerates, Left and Right turns). Shoot stars with the space key.

Lee Reilly: Had fun with this one - felt the difficulty settings were just right 👌🏼 Additional levels or repeat plays with more rocks / less time would be a neat addition. Very nicely done! <3

Raf Mertens: Appreciate the addition of a difficulty select! I think a great mechanic would be if you started with much less oxygen and had to collect the stars/oxygen as you go along to survive! It would make a great incentive to collect the stars. Maybe also a boost for the risk takers :) great job on the game though.

Michelle Mannering: - love the backstory - 8 bit music! Love it - doesn't appear to be working; there was nothing to drive on... only black screen. Tried in Chrome and Brave