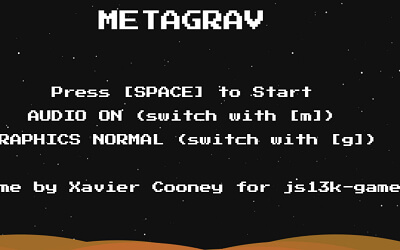 You've just exited hyperspace and your ship is damaged! Gather parts for repairs... but there's something lurking in the shadows.

The only control needed for gameplay is SPACE (because ya know... space), but you can use M to toggle audio on/off (there's no music on the tile screen by the way), and G to switch between graphics detail modes (use this if you're having performance issues).

Ania Kubów: Big fan of the humorous intro - it was useful and funny at the same time. The game looks and felt very smooth. I can see myself getting easily addicted. One thing I would suggest is having a skip option for the intro for those returning. Great work!

Christer Kaitila: nice and smooth! and I likes OSCAR's npc dialogues! once the asteroids were part of the levels it was just the right amount of challenge. nice work.

Jupiter Hadley: What a fun story and game! Very well made and has a big one more go feel!

Ahmed Khalifa: First of all, congratulations on finishing your game for the JS13K jam and adding sounds, music, and story. That is pretty great. I love the way the story and the game play advances, even just teasing about the boss during the game is fun. It reminds me of VVVVVV smashed with flappy bird in one game. There is very small stuff that could be improved to make the game better, for example, the game depends on spamming the space button to be on the same area which make it less strategic, maybe you could make cool down for that so the player need to think about their path. Another thing, the bottom area of the screen cause damage but the top part not, it is kinda weird because I could relax without spamming the button when at the top but not at the bottom, I would recommend to make it both identical so less need for spamming. Another thing is laser could be more utilized for destroying asteroids instead of just used for the boss fight, and destroying big asteroids might make it split. Also, maybe laser could have cool down if the gravity flipping doesn't have cool down. Maybe another mechanics can be added similar to VVVVVV for example loss the ability to control the flipping at one level and you always flip when you hit the edges or when hit certain items, etc. Overall, I enjoyed the story and the game, great job :)