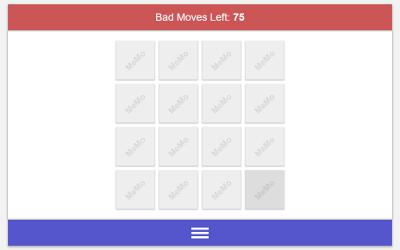 Memory game for kids and adults

1. Turn back any two cards and remember what number was on the cards and where it was.
2. You have 75 moves, match two same numbers to get a score.
3. When all the cards have been matched, the current level is clear and you go for next level.
4. The game is over, when the last level is cleared or you have no moves left.

Anonymous: First of all I would like to congratulate you for the good job of creating a well polished memory game with a very small footprint. I understand that you used numbers instead of pictures to make sure that the game doesn't have a high footprint but I think you should make sure that different numbers have different colors. I liked the color scheme right now but because different numbers have similar color, it caused a lot of confusion in memorizing where each number is. Maybe you could make sure that different number have different colors or you could try something new using the color. For example you can match also with color but only color with no number will get you less point than both but at the same time it will cost you a bad move if you decide not to cach that. Another idea, is to use it in combos, for example if you open two of same color, the game allow you to open more and more as long as from the same number and if at any point you got any two matching then you get there points. Another idea is to use the color as indicator of the surrounding numbers if they are higher or lower it might be interesting. I think adding a twist is always good (you could do that after few levels or in a different gameplay mode). Overall, good job on creating a very solid game.

Pedro Fortuna: It's nicely implemented. However, it's not really original. I would try to introduce something that could be unique to this game.