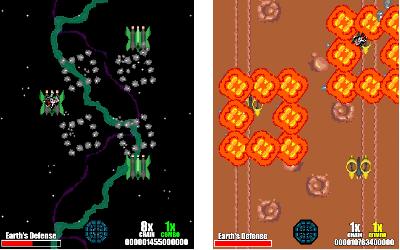 GAMEPLAY:
Land on three or more enemies of the same color to trigger your planted bombs. Detonate the bombs either by landing on an enemy of a different color, or by jumping back to your satellite platform.

CONTROLS:
Use the mouse to aim and jump, or simply tap the screen where you want to jump.

DESCRIPTION:
Inundated by extra-terrestrial forces, the last hope separating Earth from total destruction is a man named Max, and his preternatural ability to jump and to destroy things of a similar color. His vertical leap is beyond comprehension. His bombing skill are first class. Are you a bad enough dude to jump all the way from earth to the alien's planet to stop the invasion?

Dann Sullivan: This was very different than I expected from the screenshots, but I really enjoyed it... like, really, really. With some tweaking on the art and a decent soundtrack this could do well on mobile - if you do move forward on that, do reach out.

Lee Reilly: I liked this one a lot - very challenging... especially with a trackpad vs. a mouse. I just wish there was a high score table... I think that might be the highest score I've recorded in any game ever! Well done :)