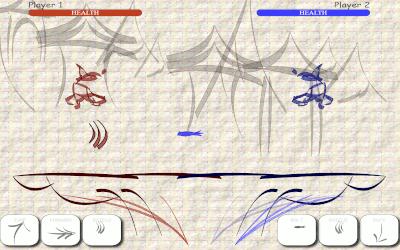 A deck based magical dueling system for one or two players.

Visit the university, learn to duel, beat the AI opponents or play against another human in PvP mode.

Multiple AI personalities and tactics; gorgeous brushed graphics and five arena's in which to compete.

Björn Ritzl: I like the idea of turn based tactics for something like this. The description says it is a magical dueling system, and I guess it is, but it is also similar to a tactical beat-em up game. I can't decide if I like the style of the graphics or not. It feels pretty dynamic with the brushstroke/calligraphy style, but I wonder what it would look like with another style? The actual gameplay is easy to interpret most of the time, but sometimes I misjudged a situation and thought I had the chance to dodge an attack, but I was too close. This is perhaps part of the charm an makes it more dynamic, but I wonder what it would be like if movements, attacks and the playfield was divided into discreet areas so that you could more easily plan a series of moves and calculate a likely outcome based on your moves and the available choices of your opponent.

Ale Bles: The style is really something else and the game is quite fun as well! Refreshing as well to see a game not use canvas but drawn via SVG. Execution is really nice, animations are well done.