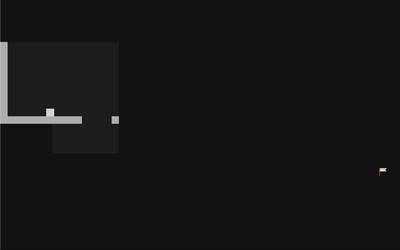 You have lost your sight, but gained the power of echolocating. When you start, you will not be able to see the level. By pressing SPACE you can temporarily reveal the space around you.

When you know where to go, use the WASD/ZQSD/Arrow keys to move and jump around.

To advance to the next level, you need to reach the flag. There are also coins to be found, which you can reveal with your echo.

If you want something really hard, try the Memorizer game mode. You will get a single echo at the start of the level. After that you need to traverse the level from memory. If you die, you will get a new echo.

Due to personal stuff, I didn't have much time to work on the game. The mechanics are working and there are a few levels and two game modes, but I would like to add more levels, sounds and better graphics in the future.

I'm mostly interested in any feedback you may have about the mechanics of the game.

Abiyasa Suhardi: A simple but well-implemented game mechanic. It has 2 different modes which allow the player to learn to master the game and enjoy collecting bonuses. I find the game idea is very Interesting; a good and smart interpretation of the competition theme. It is very short but has potential. I also like that it has good code & documentation. The hardest part would be the level design. The levels should be hard enough that the user cannot easily solve the level by just holding the right arrow with some jumps occasionally (it would be too boring) but it shouldn’t be too hard that it frustrates the user. Adding the coin was a good start.

Spartez Team: Thank you for your submission! I have finished the game! I liked the idea and played both of the game modes. Funnily enough, the supposedly memorizer game mode was easier for me. I think the memorizer worked better because I was not busy trying to see the map ahead after every jump, which make me like the memorizer even better. I felt I could just look at the map rhythmn when revealed and try to stick to it. Even better was the quick refreshing after failure, which let me improve my timings. And it took me a while on the 3rd level of the memorizer to figure out why I was falling out on the last block :) I think an idea/direction to follow here would be to utilize more of the memorizer capacity. You could add a pulse to the interface and help the player to synchronize. With the player synchronized, you could start moving things on the level to the "beat", so the player would need to keep counting and moving to the right movement to get things in place. I think that would require that the reveal wouldn't stop until the player moved. The player sees the moving thing, count and try it in some beat. That would reward players to not stop moving as well. The moment you stop and try to recover some mistake, you are done because you are in the dark.