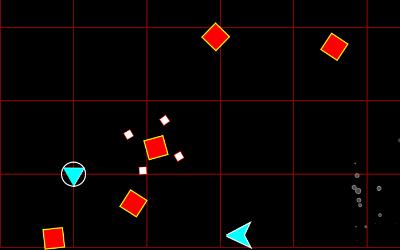 Your spaceship is lost in strange space. You must survive and escape. But first you need to retrieve four gems lost somewhere in this space. This won't be easy though, because hordes of enemy ships are coming to defeat the intruder and they will not accept gems to be easily lost. And your ship is not a battleship and cannot shoot.

Is there any hope left? Maybe, but probably not. All is lost.

Tomasz Wesołowski: Wow, this is HARD.... This game makes me feel really hopeless! I was able to catch a gem or two without getting hit once, so I suppose it's somehow possible to win... but now I know how was it like for the Starfleet to encounter the Borg.. These inhuman cubes that you could not harm in any way!

Giovanny Beltrán: So difficult to get the gems because the ship is hard to control and there is no way to defend from the enemies.