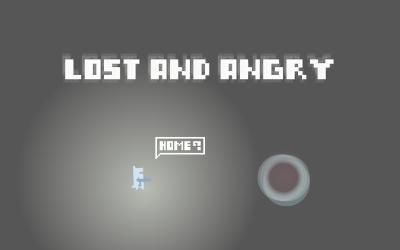 Getting lost in a multiverse makes me angry... would you help me get back home?

Specials thanks to Juan Ros (@GamesMusicProg) for the music and @mac_moster for the testing.

Mitri Wiberg: Nice game, I really have fun with it and stayed playing for a while A lot of potential here

Tomasz Wesołowski: Neat! I love the music and sound effects. The main weapon is really satisfying to shoot and it contributes a lot to the look&feel of the game! Now comes the embarassing part: It took me way too long to figure out that if I move to the right I just come back from the left! I thought that I can either use the portal or go further on right, and I concluded that the game is like a labirynth of areas interconnected by portals. :D It definitely contributed to the 'lost' theme, I legitimately got lost! I imagine it could be by design, but if you'd like to emphasize the "screen wraps around" idea, the light around the player could wrap around as well. Same for bullets. One thing I'd improve is the platformer physics, I'd be happier with more responsive controls (less inertia or less 'slippery') and some control over jump height. (Also, slipper throwing? Isn't that a meme or something? :D)

Jupiter Hadley: I really enjoyed the game, but sometimes the procedural (or random?) generation made levels impossible...