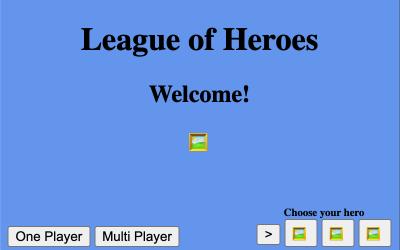 CONTROLS:
Click somewhere to move there.
Click an enemy to attack it.
Hide in the bushes to not be seen.
Click a button to use an ability.
On desktop use 1, 2, and 3 instead.
The goal is to defeat the final enemy tower.

DESCRIPTION:
This is an attempt at a 13k MOBA. It worked out pretty well. Due to life (having to pack and move, and finally returning to work full time) I did not have enough time to really finish it. I left a kilobyte and a half on the table :(. I just ran out of time.

Play as one of three heroes. It is poorly balanced, but hard to win without dying. It handles like a normal

Ahmed Khalifa: First of all congratulations on finishing a big game that resemble league of legends and Dota. This is not an easy thing to finish and fit on 13k. I would recommend making the game keyboard controlled and the spells and aim with the mouse like top down shooters. It will be a new take on the Battle Arena games since not a lot of games do that. Also, enemies should be less dumper, they should always attack the closest to them and not the first thing they see. It caused me a lot of lives because they see me first so I start running but enemies don't stop to attack other stuff but just continue after me. There is a lot of room for improvement and you could try to set yourself than other battle arena if you decided to continue on it by either mix it with another genre like topdown shooter or maybe crafting genre so the hero can build walls and stuff (mix between tower defnese and battle arena). Overall great job to finish it on time and fitting it in 13k

Lee Reilly: Impressive! Liked the Magic: The Gathering-style characters and their special abilities (especially the FireQueen's no. 3 - very satisfying). Hope you continue to work on this after the competition - easier attacking and no 13kB constraint would bring me back for more 😀

Ania Kubów: First off, thank you for submitting the game despite not being able to finish it, as mentioned in your description. I would love to be able to play it one day!