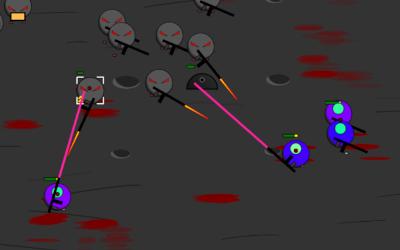 Defend the last bunker on the moon against endless waves of invaders.

Noël Meudec: I am not sure I had access to the latest version of the game. On the screenshot it looks like I can control many characters, and in the "Controls" section there is a mention to a "sword guy". I never had that. I had only 2 characters to shoot and one character to mine gold. I cannot do anything with that gold, and I cannot create new units. I tried to survive as long as I could, but nothing changed. That said, it is cool that there are two ways to control units. The graphics and the AI are not exceptional, but they do the job. Overall, I feel I only played a demo of the game so it is hard for me to provide more feedback. It could become a good tower defense if the gameplay mechanics were fully implemented.