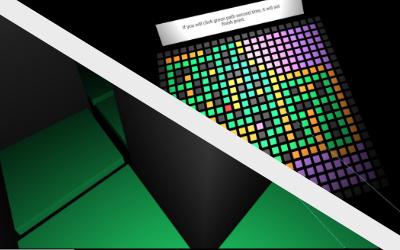 Back:
- In childhood many kids was playing labyrinths - thanks to books/magazines: "Back in time..."
- One of Greek mythology was about Minotaur and Labyrinth: "Back to Greek legends..."
- In very hard labyrinth you can lost yourself and you will not find "start" position: "Back to back..."
- Only one way to get out of Labyrinth is at the and of it: "Back to reality..."
- If you will like this game you will back again to challange your creativity and yourself!: "Back to me..."

Sébastien Vandenberghe: It is amazing that in 13k there is a game and it s editor !!! The editor and the game are both friendly and pretty intuitive. Maybe having a bit more indication on the walls could help solving the labyrinth as the difficulty is currently pretty high :-)

Josh Marinacci: I like the concept. I think you should turn it into a full fledged game with better graphics and controls. I love the idea of letting people share maps. Thank you for including an editor as well. Impressive for 13k

Fernando Serrano Garcia: I really like the idea of being able to edit the puzzle in VR or in a 2D browser and share with other people, the same as playing it in the desktop or on a VR device. I'd like to see some kind of visual feedback when I click the floor to move forward as sometimes, as all the objects looks the same, I have the feeling that nothing has changed and that I remain on the same place :)

Diego González: I tested this on a Oculus Rift in Firefox and in a Note 10 in Samsung Internet and couldn't really control the game. I did try the 2D version and it worked with the mouse, which was cool. THe game has nice visuals, and it could benefit from refinements in the input in VR. It is nice you added a message to guide the user to turn around depending on where they stand. Overall I am a bit sad I couldnt try it in VR!

Jupiter Hadley: This is a great tool!