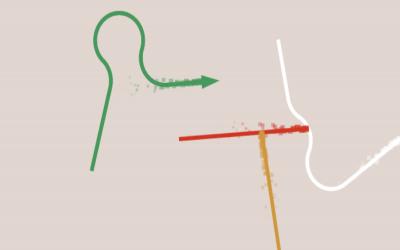 This game is inspired by Achtung, die Kurve!

It's a 4 player local multiplayer game. You control a space ship and need to stay alive as long as possible before there's no space to navigate. You die if you hit a player's trail or any of the walls. Each player has one bullet they can fire to clear some space.

You can select additional space ship skins for your ship.

You can write your name, and it will be stored on the smart contract. The name also determines the color of p1's space ship when you are logged in to NEAR.

The three other ships' color are chosen based on Drand.

Nathan Lie: While I was unable to find a group to play this with, this looks like a nice implementation of games like the one its based on, and the light cycle game. The music provides a nice, yet slightly competitive atmosphere and the controls are tight. The choice of granting additional ship skins is also a great use of Web Monetization in a game.

Joep van Duinen: Nicely inspired by Achtung die Kurve, would have liked to see a bit more innovation. Great concept to build upon. I like the idea of having additional skins for your space ship. Space to restart the round feels unnecessary. Overall well done!

Ewa Mazur: Plus for implementing additional skins for Coil subscribers. It's nice that everything is well marked on the main menu, that there are thanks to subscribers and info for non-subscribers about what they can get if they subscribe to Coil. Unfortunately I couldn't play the game because it didn't work under my FF.

Michelle Mannering: - be great to see this running on the full version of NEAR wallet - good use of monetarisation - music is very cool; chiptune (gotta love it!) - graphics are awesome. Didn't have 4 people to test it out fully, but great concept

Tim Sulmone: Gameplay is solid - reminiscent of tron lightbike with some twists to it. Was a cool use of NEAR and drand protocols.

Vlad Grichina: Interesting game concept, reminds me of Tron. However I feel it needs a bit more work (or maybe just an online multiplayer).

Johnny Matthews: This game sounds super interesting, and having four player local co-op on one keyboard is a super fun idea! Unfortunately, I wasn't able to play the game. There doesn't seem to be a hosted version available, and I couldn't get the repo to install. According to the package.json file, `npm run start` was to command to get things going, but I ran into several dependency errors, mainly round typescript. After taking a look at the code, however, this project is still fairly impressive! I can't validate whether any of the contracts work, or whether the Drand randomness is used effectively, but it looks like the developer has at least attempted to decentralise this project a fair amount. It would've been nice to see a version hosted on IPFS however.

Ryan Baumann: Simple but fun! I wish there was more use of the decentralised bits. Fun idea for a game though.

Paul Gadi: Fun minimalistic game, integration of both WebMo and NEAR is impressive!

Dietrich Ayala: Uses Drand, and NEAR for login/out! Rad music, and a really nice cursor sparkler animation effect. In fact as soon as you start moving around you get a sense for how cool this could look. But I couldn't figure out the mechanic. Maybe b/c single player. Having a mode to play against bot would be rad.