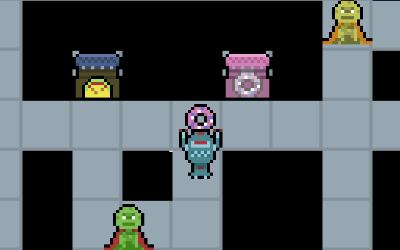 You are a defense robot tasked with stopping an alien invasion, but your kill.exe file is missing. In order to get the aliens to leave you have to give them what they want: food!

Make sure to bring the right food to each alien or the food will be you!

Ania Kubów: This game was incredibly cute! From the donuts to the little aliens, it was a delight! One thing I would mention is that moving the robot on an intersection was not easy, as sometimes I struggled to go from a horizontal pathway to a vertical one, but overall, a very fun game that I enjoyed.

Lee Reilly: Nice idea and implementation. Cute pixel graphics. Kudos for supporting ZQSD! Fun to play, but there didn't seem to be any progression, or my highest score was 15 and I did't quite get there 😀