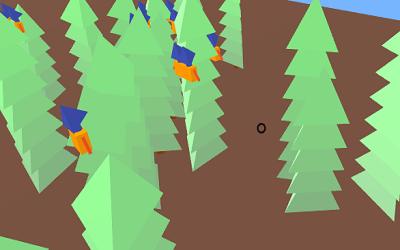 Playing Jouer is easy, just push back the aliens to the ground before the timer ends. Make sure that you have at least 100 Score.
If you lose The Game will Re-start
CONTROLS
USE WASD on Desktop To Move,
USE E or Click on the screen to Shoot
FOR WR
USE XYAB TO MOVE,
And Shoot Using the GRIP

Sébastien Vandenberghe: This is a nice little game easy to grasp with and get started. The collision and moves felt a bit unnatural and sometimes did not work but I still enjoyed it :-)

Anonymous: A neat idea that's a little rough around the edges. Key improvements could be to move the origin point of the player's projectiles to some where besides directly in front of/inside of their position, as the projectile will briefly block the camera. It also needs some feedback on the win/lose condition as well.

Josh Marinacci: I couldn't get the game to play on my Oculus Quest. I'm stuck below a tree and none of the buttons seem to do anything.

Fernando Serrano Garcia: I couldn't get it to work on the Quest but I tried it on the PC. When in VR the score text is almost outside of the viewing area so I couldn't read it. It's better to make it closer to the center to avoid these problems. I missed a game end notice as after I run out of time I could still keep shooting and new aliens appears and the score keep increasing. I believe it could be better to have less trees as there are so many and so many fast aliens that it was really hard to get the sense of "winning" there :)

Diego González: I like the idea of pushing back the aliens, and I think it could benefit from adding audio and a more defined onboarding for the user. I believe there might be a bug in the initial position since it moves depending of if youo wear a headset or not.