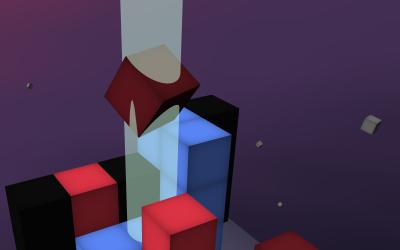 Christer Kaitila: lovely graphics - so nice and smooth with eye-pleasing gradients. the movement was tight and accurate and fast, which was awesome. I found it difficult to see which were bright and which were dark blocks, and at first was confused why certain blocks could not be lifted. If they were far more visually distinct it would be a great improvement - for example,. if the unmovable blocks had a lock or rivets or X on them. no need to be subtle! very cool puzzles with a good difficulty progression. fantastic work.

Raf Mertens: I think some thought went into the progression of difficulty in this game. For me it was pretty easy to pick up the instructions and I enjoyed the challenge. The 3D visuals are nice and I could see this being a more fully-featured puzzle game. I think the addition of some simple sound effects would have been nice though just to add a bit of immersion in the game.