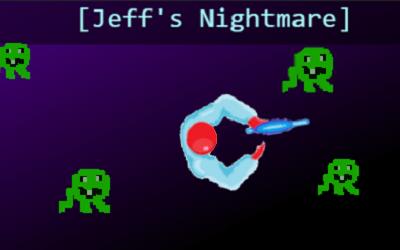 *Can be played with or without decentralized!*
Controls: Mouse to move. Click to fire.

STORY: Jeff is having nightmares before his big space launch. As long as his courage holds up he'll keep sleeping.

DECENTRALIZED:
NEAR: log-in/log-out, getAccountID
(notes: I wanted to do more with NEAR, but implementing the contract methods was too much of a learning curve for me. I would have liked to implement a signed visitor's book.)

PROTOCOL LABS:
I pulled in a random value from Drand and looped through the digits to set the speed of the monsters.
See code: drand() and useRandom() lines 245-263

Amusing note: This is a spin-off of my other game, when I was trying to get the decentralized tech working I didn't want to have to work around my full-sized game, so I did this less complicated one and as I got some things working the game just filled out a bit.

Sasha Hudzilin: really enjoyed the game, was nice seeing "courage" to be used as an attribute was nice that you've worked on implementing log-in with NEAR, we are happy to help

Raf Mertens: The music and the shooting is quite satisfying. It wasn’t clear exactly what the objective was though, since the courage bar seemed to decline at random for me, so I wasn't sure how I could get better at it.

Tim Sulmone: Music selection was fitting for the theme/plot. It isn't very clear on the conditions behind the decrease in courage. Fun shooting mechanics.

Michelle Mannering: - love your idea around visitor's book; appreciate that it's a steep learning curve - still good integration with NEAR; easy and didn't have to do anything - still a little bit buggy with some of the shots/aliens - great overall concept and neat take on space cadet - love the music too

Johnny Matthews: This game is hilarious, mainly down to the connections between someone called "Jeff" and going to space. On top of that, it's technically quite impressive. The gameplay and graphics are somewhat simple, but the decentralization behind the game is solid! It was good to see NEAR and Drand implemented. NEAR has quite a steep learning curve, some it's understandable that the developer ran into some issues here. With Drand, it would've been better to use the randomness from Drand as a seed into the built-in random() function within JS.

Paul Gadi: Good start with implementing NEAR, gameplay is a bit repetitive but can be the base for a more polished game loop

Dietrich Ayala: Uses Drand, and NEAR for login/out! The most calming fear-fighting music I've ever heard. The move mechanic of "towards shooting direction" was a bit weird at first but kinda cool actually - no trying to move and shoot at same time, so becomes a calming never-ending stream of fear fighting. A NEAR guestbook would be cool and also I want an NFT for how much fear I fought!