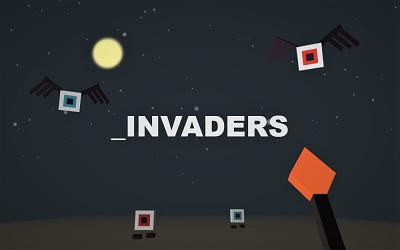 _INVADERS is Space Invaders-inspired 3D game where you must stop endless waves of invaders from space! Fight against 3 types of invaders and 4 mini-bosses alone or with friend!

Sasha Hudzilin: one of the best gameplays out there, super exciting! Didn't see use of NEAR, but i assume it was just IPFS in this case

Ahmed Khalifa: First of all congratulations on finishing a 3d game with music and fit it in 13k during the jam time. This is not a small achievement and you should be so proud of it :) I love the idea that you can shoot in any direction, I think would be amazing if you can extend it such that enemies come from all directions and not one direction, it will give the free control of shooting a new meaning as you need to check if there are enemies from behind or not. you can make a mini-map in the corner to show the enemies coming so you can prepare for them. Another enhancement could be having different types of enemies than just walking vs flying, maybe enemies that have shields and rotate to block bullets, or suicidal enemies that run toward you and suicide, etc. I was curious about the CO-OP mode but couldn't create a host for some reason. It never did but I am wondering is it like a two-player or a player control part of the space and the other control the remaining in a similar manner to space team game. Overall, great work and thanks for participating in JS13K :)

Ania Kubów: I enjoyed the physics behind this game in terms of hitting the space invaders and found myself getting easily addicted. Bonus points for the soundtrack!

Ryan Baumann: Very cool and fun! I found it very easy to connect with peers and play. This would be brilliant if it used IPFS/libp2p's PubSub feature, or at least if it used it in part to help achieve connectivity and play. The game itself is fun, and works pretty well with nice music and graphics. I see it says it has some monetisation, but I didn't really see how it's implemented.

Nathan Lie: Nice translation of Space Invaders into a 3D space. The difficulty ramps up considerably, and the somewhat low framerate makes it difficult to keep up. Still, it's an impressive first-person shooter game that handles pretty well. The Web Monetization bonus also provides a pretty substantial visual change, which is really nice. The extra life is useful as well.

Noël Meudec: Nice retro vibe. The gameplay is richer than I thought, 3D brings something new to the original game. Nice graphics and OK music. The controls are good too, but when the enemies get very close then we cannot shoot them anymore. Maybe increase the radius where we can shoot (it impossible to shoot above our heads). Overall, very well made game and a good surprise!

Ewa Mazur: I enjoy the game. Markings for subscribers are readable. Although I would highlight this extra life for subscribers somehow. And I would also give some info about subscription options for non-subscribers.

Michelle Mannering: - home screen is super cool - chiptune music is awesome! - very intuitive - probably should be "life" not "live" - love the co-op and multiplayer aspect - The NFT part was slightly confusing and not sure where to buy the extra life or tesla coin weapon

Vlad Grichina: Nice reimagining of classic arcade game in 3D. I couldn't get coop to work, however this use of WebRTC fits well for a game.

Johnny Matthews: It's like space invaders, but as an FPS! Very cool! The developer has clearly tried very hard to decentralize this game as much as they can. I'm particularly impressed with the uploading of screenshots to IPFS! Unfortunately, I wasn't able to actually view any of the screenshots, but it's great to see the attempt!

Paul Gadi: Great atmosphere and use of web sockets

Dietrich Ayala: Published to IPFS, and even saves screenshots to IPFS through nft.storage!! Really unique look and feel. Gameplay is classic, and music suitably old skool. Really nice work. Would be rad to mint NFT for high score and have a distributed leaderboard too. I tried to open coop mode but couldn't get it working.