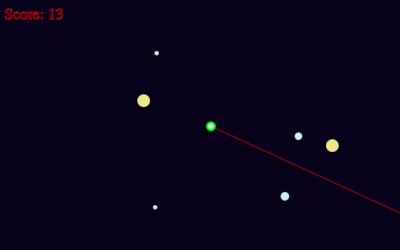 What happens if the Internet scales across multiple planets and star systems? Can you help transmit packets across the galaxy?

The objective of the game is to transmit an Internet packet from the source planet to the destination planet and then back again to the source planet. The packets can hop onto other planets and get retransmitted from that planet. Both source and destination are marked green.

Ahmed Khalifa: Great job on creating the game. It has an interesting concept and I think you could explore it more. The game reminds me of Scattle game "Constellation Chaos". I think the concept is great but maybe giving the player the control on the launching direction of the packet with a shorter aim line or slower rotation speed is good. You could also explore ideas such as different planet physics like bouncy ones instead of attaching ones similar to a pinball machine. You could also have worm holes and black holes to effect the shooting. Overall, great job on submitting to JS13k competition. I think the concept is great, I think you should try Scatlle game as it will help you understand the main problem with the current prototype (the player is not controlling a lot and even with no player control the high speed rotation is killing it).

Ania Kubów: This was a concept in a game I have never seen before, which was very refreshing! I enjoyed timing the shots to get from one planet to another. It is definitely harder than it looks!