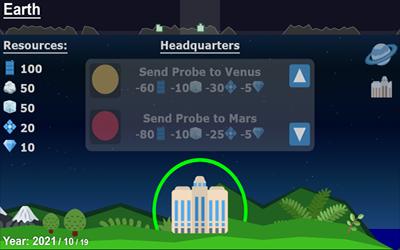 A space exploration and resource management simulation situated on Earth, Moon and pretty much every bigger terrestrial body in the Solar system. Enjoy this journey to worlds unknown!

Tom Greenaway: Good: - The camera movements and view of the solar system were impressive considering the constraints. I liked the idea of a landscape which matched the planet shape/dimensions. To improve: - I struggled to understand what my goal was exactly. It's also possible I was missing some visuals? The buildings weren't shown for me.

Jupiter Hadley: This game feels quite complex for this jam! Well done.

Nathan Lie: Game is a bit simplistic. It's not unlike an idle game in that the idea is to increase your resources and spread them as far as possible, but there's no clear immediate incentive. Also, it's lacking some feedback for certain actions - I got no visual confirmation that I was sending probes or miners, and I wasn't able to interact much with some planets, despite sending stuff to them. Also, there doesn't appear to be a Web Monetization bonus.

Noël Meudec: The beginning of the game was OK, it got me intrigued and I wanted to discover more. I reached the point where I could send probes to planets and colonize them. Unfortunately those actions don't seem to do anything, so I am stuck on earth collecting resources. Not really the most fun. Is the game unfinished? Also, half of the graphic assets didn't load on chrome, I had to play on my Android phone to get it to work properly. Overall, what I saw of the game felt more like a tutorial than a complete game (maybe I got a bug or something?). It looked promising, so I hope it gets fixed (or finished) some day.