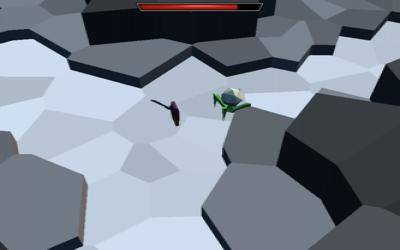 I Want to Help Fight the Demon Overlord, but I’m Just an Intern!

You want to defeat the demon overlord, but you’re just an intern! Go back to town and fetch us some potions.

Controls:
- WASD or arrow keys to move
- Space or control to attack or interact with NPCs
- Click on the menu items

Anonymous: Screen says “Loading…” for quite some time. The game would benefit from some feedback to give an indication that it is not stuck. The game felt responsive and ran with good framerate. Nice with the 3D world, I feel like I’m walking around in a 3D Voronoi diagram. I would have liked to see a bit more care put into the way my character moved. It felt like I was gliding on ice. I kept moving for a short while after releasing the movement keys. The character could probably also benefit from a small up-down bobbing animation while moving. Also, I can move through buildings. I was also able to get stuck with my face against a wall without being able to turn since a monster pushed me up against the wall and hacked me to pieces. I feel like I should have been allowed to turn to at least fight back. Why don’t I have a head?

Jupiter Hadley: Funny title and story! It's a nice game that feels good to play.