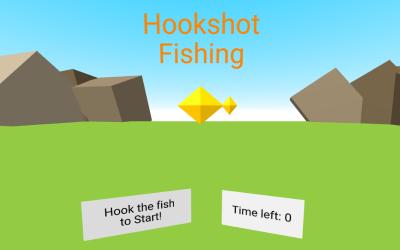 Go fishing with your trusty hookshots! There are several fish floating around, and you have a limited amount of time to catch as many as you can.

Controls:
- Press any button to shoot your hookshots, then press again to pull them back.
- Collect fish by catching them with a hookshot and pulling them back towards you.

Coil subscribers get an extra 30 seconds of gameplay.

Sébastien Vandenberghe: The low poly style of the game looks real cute. I wish to have a version not requiring the 6 DoF controllers to play in cardboard :-)

Josh Marinacci: The game plays perfectly on an Oculus Quest. The graphics are pretty good given your limited size. I would have liked slightly better sounds, though.

Fernando Serrano Garcia: Very nice input mechanics and original concept. It was fun! It would be great if the controller could include some asymmetry or include a helper on the scene to know where the controller is really aiming, as well as more movements or reactions on the fishes. But overall it looks cool and the overall aesthetics fit together

Diego González: Tested on an Oculus Rift using Firefox and a Note 10 with Samsung Internet. Only criticisim I have with this is that i doesn'e work on mobile devices. Definitely would benefit from adding mobile support (magic-window + tap). Its fun, audio cues are clever (higher pitch per additional fish in hook), and it is pleasant and quite addictive I must say.

Jupiter Hadley: Sadly, I don't have the right controller to play this.