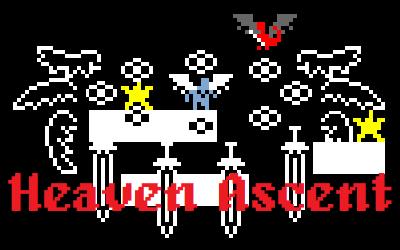 Take charge of your own destiny by ascending to the celestial throne, navigating your way through the heavens, fighting demons and collecting stars, before facing down an array of angelic bosses who seek to stop your ascension.

Unlock an array of abilities and upgrades each time you die, opening up the game world and getting you one step closer to the elusive final empyrean guardian, accessible after collecting the prophesied 404 burning stars.

Arrow keys to move, X to attack, Z to dash (when unlocked). ESC for menu, arrow keys and enter to navigate. Music and SFX on by default (volume controls in menu).

Coil subscribers gain access to unique cheat modes and options that alter the gameplay or the graphics, toggleable via the menu. Face down randomly generated bosses, see the world in a new light, upgrade your dash with a rainbow flourish, and more!