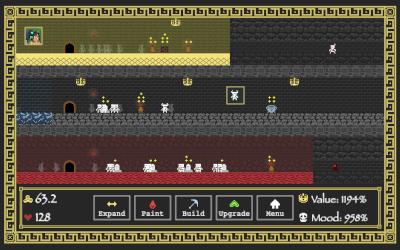 You are Hades - greek god of the dead and the king of the underworld. Your duty is to build underworld defence to protect yourself from enemies. Monsters of the underworld and pesky bandits will try to tackle you. Don't be fooled by first waves. Pressure will only increase over time!

Create barricades to block their way, build magic altars which will burn them down, and spawn skeletons who will protect you. Those building can be upgraded to improve their stats.

You are also not worthless and able to throw fireballs.

- Character can be controlled with arrow keys. Use mouse for interaction. Fireballs are casted automagically when you are close to the enemy.
- 👑 Value stat increases the amount of arriving souls and hence money inflow.
- 💀 Mood stat improves character attack speed and damage.
- Both stats are slightly reduced when additional souls arrive.

= NEAR Challenge:
You can connect with your testnet NEAR wallet in order to buy 💸✨premium tier✨💸 and receive more money at the beginning of each new game. This would also unlock high-end rainbow wall and floor tiles.

You can also try to play on other players maps and clone them simply by using their Near wallet id since all data is visible in blockchain. You can try with vilpy-beta.testnet
Changes in this case won't be saved into other players state and will be available only for you.

= Arcadia:
Arcadians avatars can be used to improve aesthetics of your underworld. Simply pick it in build menu, enter ID and enjoy a new painting. Those would be cropped to include only the head tho.

= OP Games:
Decentralizing The Hadesverse!
All saved maps are shared in NEAR blockchain, you can fork other bases and use them as inspiration to make your Hades underworld unstoppable! And of course code is published as open-source.