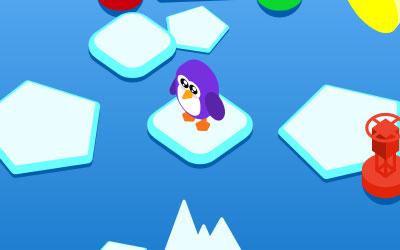 DESCRIPTION:
The killer whales are trying to kill our little penguin friend but he does NOT have to worry because you got his back!

HOW TO PLAY:
CLICK or TAP to start the game
Use the ICE BLOCK to SMASH the whales

Christer Kaitila: Wow, such incredible art! I love the cute penguin, the bright colours, and the smooth wave bob animation. The gameplay didn't hold my interest for long but that lovely purple penguin definitely deserves to be saved. The addition of sounds, different levels, powerups, and new kinds of enemy would bring it to the next level. Such a great looking entry! Amazing work.

Florian Rival: Love the assets and graphics! Very nice to look at. I would have made the game a bit faster so that it's more about being fast and having reflex. Could have been interesting to show the score too and have a few sounds effects when whale are defeated.

Anonymous: Nice graphics! I miss a visible score counter though. Instead I got an alert box (with an input field) at the end of the game to show the score. There was a graphical glitch on the light cones of the lighthouse when the pointed due east-west. The killer whales could have benefit from a nicer death animation. They did not scale down proportionally and instead scaled down slower horizontally, ending in a thin vertical strip instead of a tiny dot. Maybe they could have gone belly up or something?

Jupiter Hadley: Simple game with very cute graphics! I do wish a score was present on the screen, but it's a very good start.