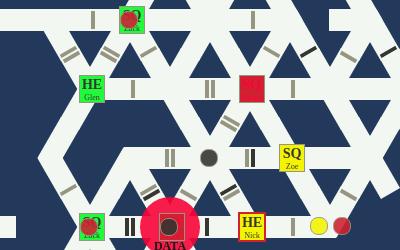 The data were lost in an unpredictable state container with high entropy. Hard work of your quants is worthless. As the battlefield of the information warfare shimmers with vanishing possibility you know what to do. You send your team to the Glitch.

Recover the data and go back to the evacuation zone before other corps lay their hands on it. Watch out for friendly fires and shifting world state, as the reality of Glitch can change with each chance taken.

GlitchSquad is a turn based action game inspired by laser squad, theory of possible worlds and the way Redux containers behave if mistreated. Each turn (rarely) and when shooting the Glitch can shift its state to a neighboring possible state by replaying all actions in a redux-time-travel-sort-of-way while generating new random values and thus changing outcomes of actions.

Elle Chen: would be nice to have some tutorial regarding the gameplay

Jupiter Hadley: Interesting game, though I wasnt quite sure what was going on or what my goal was. I wish that was more clear in the discription. My partner didnt quite understand it as well.