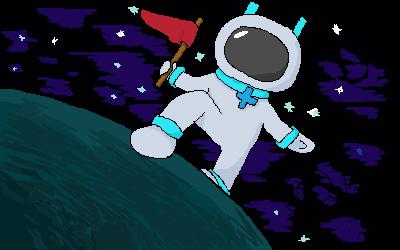 As Neil Armstrong said on the moon, “That’s one small step for man, one giant leap for mankind.”
Giant Leap is a 2D side-scrolling game.

In this unknown universe, with limited oxygen, you will explore the brand new space and raise the flag and land on the 13K moon. But, be careful of the oncoming meteoroids! Have fun!

Christer Kaitila: The art is amazing! I like the background effect and LOVE the cat. I tried 30 times and couldn't pass the second jump in the game. It was really depressing lolololol even after I figured out how to dash I failed dozens of times! I tried my BEST and I really wanted to see more, I am sorry, I really really really suck and just don't have good hand eye coordination. The game is really great, it's just that very first jump is so hard it could be a level 99 boss battle.

Dann Sullivan: Simply didn't work for me, something going on with the jump sensitivity.