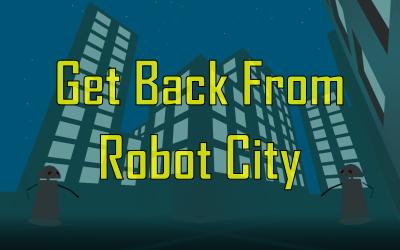 Get Back From Robot City

What is this place? A teleporter experiment you were part of went very wrong. There are robots everywhere, and they are trying to attack you. You must GET BACK FROM ROBOT CITY.

They took the teleporter, but it must be around here somewhere. You are armed with a laser blaster, which should help against the robots while you search for it.

VR CONTROLS:
Press the touch-sensitive button to move
OR Select a nearby point to teleport there
Press the trigger to shoot
Move next to objects to pick up / interact

DESKTOP CONTROLS:
Arrow keys to move (or WASD)
Left mouse click to shoot
Walk up to objects to pick up / interact

Sébastien Vandenberghe: Nice Fps like game where I really enjoyed there was a goal outside shooting :-) The graphics and immersion are pretty good as is the use of VR in this experience. I nevertheless enjoyed more the game on Desktop than VR (probably as it feels more natural to move around).

Josh Marinacci: I was able to get the keycard but I couldn't find the teleporter to win. Great game. It kept me playing. You should polish it up and turn it into a full game. Lots of people would play it.

Fernando Serrano Garcia: I like the mechanics a lot, the teleport and shooting worked as you can expect, although a missed a way to rotate easily without moving myself :) The atmosphere feels great when you see the robots far away from you in the fog. Their lasers shooting at you also look great. I'd love to have a minimap somewhere around so I could understand better where I am and where should I go. Overall really well executed concept.

Diego González: The game is interesting, and the use of fogs brings an interesting dynamic since it makes it harder to see the enemy robots. Audio is a welcome addition and locomotion does the job. The controls and intrusctions in the wall help with the onboarding process.