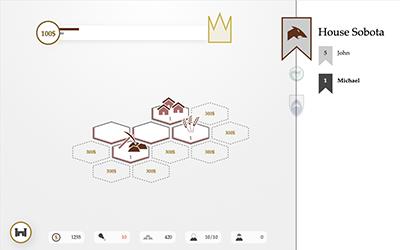 The king is old and has no heir. He will give the hand of his daughter to the most powerful lord of one of three houses. You support your house by gathering resources and paying tribute to the king. The crown will be awarded to the first house to gain the king's favor.
But only the strongest lord of a house can become the next king. So better watch out for competitors of your own house.

Gameplay
The level of your fields determine your overall strength and how much resources you gather each round. Click repeatedly on your fields to level them up
Each field type produces its own resource(towns: villagers, farms: food, mines: iron). Gold is collected through taxes
Select other players' areas in the menu on the right. Clicking on their fields levels them down
Recruit soldiers (corner menu) to attack players of other houses or to defend your own fields. Attacked fields won't produce resources until the soldiers are fought off

Anonymous: I am sorry but I was not able to play the game. I even asked a lot of people to join from there computers but the game just stuck on saying waiting for players.

Pedro Fortuna: Rather complex gameplay. Would benefit from having an interactive demo of how you play it. Or at least better instructions.

Jupiter Hadley: Lovely visuals, but i couldn't figure out how to keep getting food to feed my people.