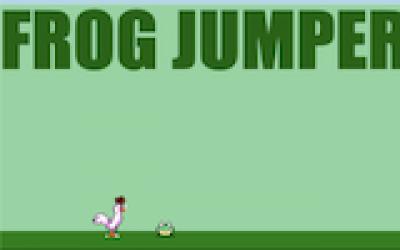 So bad it is good.
Frog Jumper has one control. Tap screen.

Jupiter Hadley: I wish I understood more of what was going on. It's a good start, but you just clearly needed more time.

Nathan Lie: Very simple game with some nice art direction and control. The objective could have been made clearer, I think - I originally assumed that I would be playing as the frog, and did not know I was supposed to be beating it in a race until the very end. Some sound would have been nice as well.

Ahmed Khalifa: Great job on finishing and submitting the game to JS13k. It is my first game that also included some sound effects so good job to add them while being under 13k. Unfortunately, the game rendering is very big that I need to scroll down to see my character. Also, the speed increase is inconsistent with what is happening in the game. Same as game restarting. You could also try to make the fire and mushrooms bigger and easier to distinguish from each other. because at this high speed it just get hard to see them and respond fast. I know you might be trying to do a high difficulty game like flappy bird which is a good thing but in order to make the game good, you need to make sure that the player when they fail, it is because they are not playing well and they won't blame the game. Right now having small size object on high speed make these objects blur and harder to see and the player will start blaming the game for being unfair. Also, you should try to make the collision box a lot smaller than the sprite to be more forgiving and focus that player dies because they game is getting harder. But overall, great job in finishing the game and submitting it. To improve the game try to eliminate all the sources of failure in the game beside the player is not skilled enough.