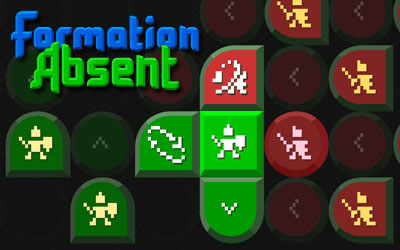 Formation Absent is a turn-based puzzle - an abstract representation of a battle. In each of the 13 stages two armies are colliding.
As a member of the Green side, you’ll have to restore the lost battle formation of the Green party. Move through the battlefield,
collaborate with your Allies (exchange positions) and fight with the Red enemy as you like, but remember: the main goal is to
find the shortest solution for best impact in each battle. All stages (except 13th) can be solved with less than 10 moves.
When you clear the 13th boss stage, you will be able to tweet your score as an Formation Absent Master! Good Luck!

You can play with Mouse or Keyboard [WASD<^>vSpaceEnter], Follow the tutorial which will guide you into the game.

The game progress will be kept in the url-bar (it will update itself automatically and unobtrusively during play).
To be able to continue your game later, keep a bookmark of the latest game link.

The game has a level editor - you can generate stages and tweet challenges :)
Post-compo link: http://www.foumartgames.com/games/FormationAbsent/

Tomasz Wesołowski: Wow, a tutorial! I definitely enjoyed it :D Looks like most levels are easy to win but hard to master... UNDO, WHERE IS UNDO, don't make me restart over and over again please! :D

Giovanny Beltrán: A good puzzle and lot of fun game, really like the beat generated when the soldiers move. Good level progression, easy to use editor. Good job!