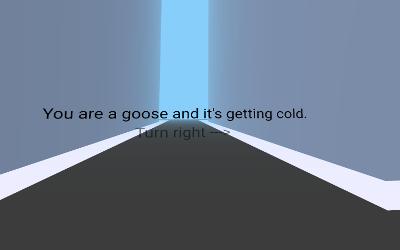 You're a goose in a big city. While the other's left, you're still looking for the park with breadcrumbs.

Sadly, I did not get it all done..

Jupiter Hadley: It's a really cool idea! I like being a bird who needs to go south for the winter. Feeding birds breadcrumbs is bad, just so you know, and I found that sometimes the game didn't quite respond the way I wanted it to (telling me to go up to a cloud above me, but there is no cloud/flying doesn't have enough environmental feedback to make sense to the player)

Diego Marcos: I could not figure out what to do.

Ada Rose Edwards: Nice city map. It was fun to fly around. There was quite a lof z-fighting on the ground when the camera got too high. it might be worth placing the roads further above the ground to prevent flickering. Some textures on the buildings or a nice sky would have really livened up the scene and prevented it from being too grey. Good use of fog though. :)