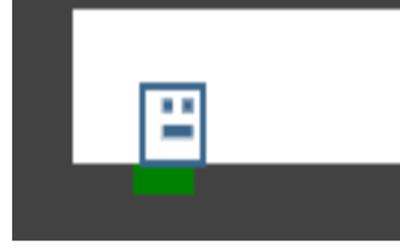 You are a lone square trying to find the right exit without losing all 3 of your lives. Can you make it out alive

This is a single level prototype of the game idea. It is played with the arrow keys, WASD or equivalent. Space bar can also be used to jump

Ahmed Khalifa: Thanks for submitting your game to the JS13k. Congratulations on making it. The concept is interesting but right now it depends on pure luck you will need to balance it in the future game. For example maybe touching the wrong door will start a battle or an evade sequence that could cause you to lose health or not. It could also activate certain traps in the level so touching the wrong ones will make the level harder to reach the correct one. In the current form, it is totally on luck which is not very rewarding to the player but overall the prototype looks great and I believe that you can explore it more and have interesting thing out of it.

Björn Ritzl: Platformer games can be tricky to get right. The physics of a platformer game is an artform unto itself. I like the speed of movement in this game, but the level design doesn't allow you to move and jump at high speeds due to the way the level is laid out. The idea that there are fake exits which hurts you is interesting, but right now the only way to discover which exit is the right one is by moving on top of them and all but one case lose a life. What if there were enemies or other elements on the level which you somehow could push into an exit to check if it is real?