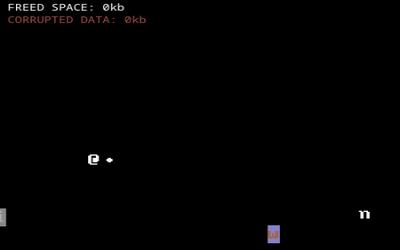 A game about a brave little disk cleanup software.
Press X to use its powerful RM Cannon, Z and C to angle the shot and arrow keys to move.

Ania Kubów: I enjoyed how this game took the theme of 'space' and took it in a less travelled direction! Smooth movements and easy to understand game play - well done!

Jupiter Hadley: Simple game, but it's a nicely made one!

Ahmed Khalifa: First of all, congratulations on finishing your game for the JS13k. I like the way you interpret the theme to be actual disk space. I like the aesthetics of the game, I always have soft spot for ascii based games that words as real-time games. I think the cannon direction is under utilized in that game, because the free movement of the player and being fast make the player not need the angle, I would recommend either remove on of them so the player either can't move and they need to aim and shoot or remove the cannon angle. You could also give different files different effects, for example: destroying good files might cause glitching on the screen or something for couple of seconds until the system restore the destroyed file, and the player will die if they destroyed more files during the glitching. Another thing, that would be interesting to explore is what happen when the player hit a good file or corrupted file. Maybe we could have an effect such that the player get frozen for couple of seconds if they hit glitch file or invert direction or etc and if hit good file same as destroying it. Lastly files could be spawned in groups instead of individual random ones which will make very nice strategy, maybe there is wall of good files so the player need to move up to pass without hitting any and down after similar to flappy bird. Overall, great job and thanks for creating that game :)