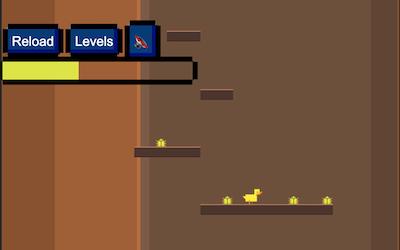 Feathers Not Found tells the story of a duck whose family has flown away. Our poor duck, though, never grew the feathers needed to fly. Your job is to help the duck navigate five levels, collecting enough feathers to be able to fly and join its family.

Eat bugs to energize. Lay eggs when you have full energy for an extra jump boost.

Move and lay eggs with arrow keys or wasd. On mobile (phones, not tablets), use the onscreen controller.

Björn Ritzl: I think you can evolve this into a really fun game, but right now it's lacking somewhat in the way the levels are balanced. I actually struggled more with completing level 4 than I did with level 5 which I finished on my first attempt. I was also a bit confused by the birds on level 3 which were flapping their wings but standing still (I thought they were supposed to be horizontally moving platforms). I'd like to see more tie in to the story in the actual game. The story says that the duck is collecting feathers, but the goal of each level is what seems like a rather owl or something. Am I getting the feathers from the owl?