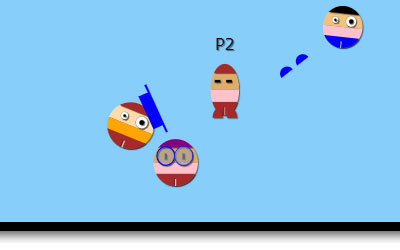 Neighborhood kids caught a wind of you getting a giant trampoline and want to play.
Though, they have no safety training, so you have no choice but politely send them BACK.
They may object, but a strong enough kick makes them lose control temporarily, letting you usher them out.
You get a point for each de-trampolined kid.
If you fall off, you lose 5 points.

Game ends when there are 15 kids present (including you).

Have fun, and don't act recklessly or agressively on trampoline in real life!

Anonymous: First of all good job on finishing a game for the JS13K competition. The game is very cute and fun and the kids looks and feel pretty good. The game mechanics are pretty fun and interesting to play around with it but the controling was not very intutive. You need to press down and up to be higher to be high enough to jump on top of other kids. I think it could be simplified to be one button like down make fast down so you bounce higher. Also, it would be interesting if bouncing on top of a kid give you a high boost and another bounce on another kid make combos which will make the game more deep and the scoring is more interesting as you try to line more combos. You can have some interesting moves like dash left or right to push kids outside of the playing area which could be combined well with the combo idea to move fast and create the combos. Also, since you can get higher with combos may be collecting stuff high in the air that can't be reached without the combos will be interesting in the game. Overall, the game feel very nice and responsive with some nice bouncy juice and cute generated kids but I think the game could be better with some combos and dashing.

Pedro Fortuna: Funny concept! I like that the kids can loose things like their hats. Graphics are interesting. It becomes slightly boring after some time. I would perhaps try to make the concept evolve a bit, like picking up special powers and using them to be more effective in destroying the fat kids :-)