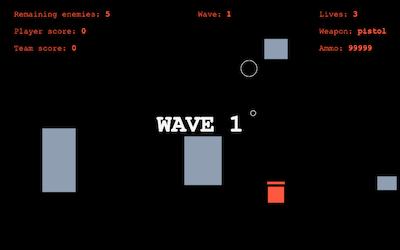 Mission:
Your team is overwhelmed! Fall back and survive as long as possible.

Christer Kaitila: Wow I had so much fun! It started off boring until suddenly I got to level five and had an EPIC BOSS BATTLE and at the last minute I was sure I would die, I got burst shot and dominated, and at that point I was thinking "wow! I totally had fun there!". Love the music. So good. I wish there was a sound when you hit an enemy. I wish the game started at level five. I wish there were 4x as many pickups and 2x as many enemies. It is possible to respawn inside a wall, and once enemies didn't come for a really long time as they were stuck in front of a wall offscreen maybe. The feel, the constant push backwards, the increasing difficulty, the smoothness, the working awesome multiplayer? amazing!!! A very impressive entry. Could be a strong start to an epic co-op twin stick shooter once you lift the 13kb size constraint and add juicy graphics for a post-compo update. =) Well done!

Anonymous: Great job - I really liked the downward scrolling camera, although it's all abstract it gave me the real feel of playing a shooter, hide after the blocks and come out and shoot - Nicely balanced difficulty progression, introducing stronger enemies at the right time which kept me engaged during game play. Suggestions - the collisions of your firing could be more lively/expressive Awesome job overall!