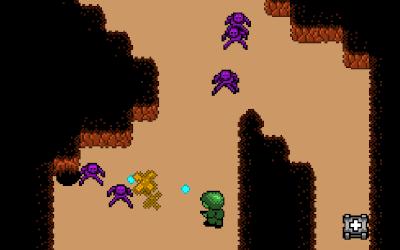 In 2091 a meteor landed on earth, and an alien lifeform appeared with it. Not so far away from the meteor, the alien lifeform has been settled in a cave. An elite squad of 3 men have been sent to the cave to secure the area for further research. But then suddenly...

Anonymous: 1. Awesome game, almost made it to the third level. 2. Great music and presence effect. Would be nice to offer special perks to folks who use web monetization. Anonymous: This game has a lot of polish - it's decently challenging, got plenty of music and audio/visual effects, and is overall satisfying to play. Only thing I think this really lacks is a little UI like a pause menu. Anonymous: Great music! It was pleasant to turn on the music on and listen to it while playing, it helped with the immersion. Graphics and play-through was really solid and enjoyable. These purple aliens were everywhere! The challenge of screen moving and not knowing what is next (even the sand creatures) made it an extra challenge of running from aliens, shooting the proper ones and making it fast enough to not get stuck somewhere. Great job. Kudos for Typescript :D Anonymous: A well executed game! I got some Commando vibes from this one, although it obviously differs quite a bit from the old C64 game. I think the levels could have been slightly shorter and even more gradually introduced new game elements and increased the difficulty. The bomb could have an even bigger blast radius to really be this rarely used special weapon to get you out of a tight spot. The crosshair could have been a bit larger and more visible. The music was nice although a bit repetitive. The sounds effects were good, but I would have liked some variation in pitch on the sound when shooting.

Jupiter Hadley: Really well polished, good game! It gets quite intense, but the amount of bullets you can shoot at once balances it well.