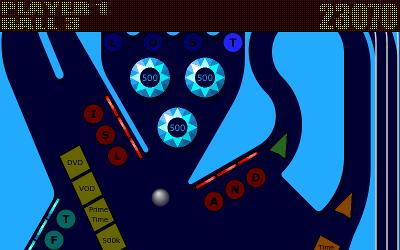 Escape is a digital pinball game featuring you as the director of a TV series. The scenario begins when an airliner crash lands onto a mysterious island.

Game tips :
Light I S L A N D targets, then aim for the ramps.
Left ramp increase your audience, right ramp adds plot twists to the scenario.
Escape run : light R A F T targets to spell ESCAPE, then attempt to leave the island by shooting all three ramps in 30 seconds.

Tomasz Wesołowski: Woah! I'm a pinball person and I was very surprised to see it here! I think you nailed lots of things here: the LED matrix is fantastic, the demo mode (up/down scroll) is just like in old PC pinballs and the table layout seems quite badass. The only thing I don't like is the physics, there are two important things wrong: the ball has a ton of friction (which prevents it from sliding into ramps etc, it changes direction as soon as it barely touches the wall) and it bounces really really hard from everything. It's kind of like "what if we played pinball with a rubber ball" :D But that just kind of adds to the overall fun factor! I played it with my wife and as always she was angry at me for winning :)