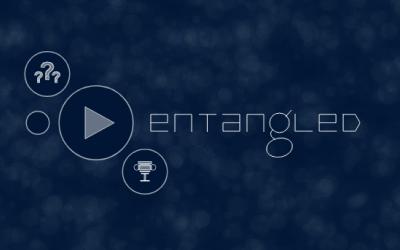 There was once a pair of quantumly entangled particles that can only get close to each other but can never fuse together. No matter what they do, they are cosmically destined to stay away from each other. All the Quantum Universe's a stage, these two particles merely are players, and can only dance forever in unison.
This is a story about a particle, forever seeking a way back to its soulmate.

Anonymous: First of all, Congratulations on finishing the game in less than 13k footprint. - I think the game has interesting story that ties to quantum particles but it is hard to read from a huge wall of text that appear in how to play. Also, I loved the graphics and the simplicity behind everything and the connections between the particles that keep me sane to see where is my goal. - I had trouble getting score more than one as trying to use the mouse to avoid all particles and reach the only one particle on the otherside is not easy especially with all that amount of particles and with no other abilities or ways to pass. It remind me with the game hundred but harder as there is very high speed circles coming to me and I can't do anything about it. - the connections between other circles looks neat but it make hard to see and made me afraid to pass them more than one time as I always feel I am gonna hit the particles. - You could add some surreal ambient sad music similar to Osmos by Andy Nealen to give the vibe and feeling of the invedible and the inability to reach the soulmate. - I don't know why the beams are limited if they don't do anything other than highlighting the significant other. I think if you want to go toward that pass may be make the game with no health and the significant other always hiding and that's why you have limited number of beams. Please check microsobia (http://www.stencyl.com/game/play/12347) Great job overall :)

Florian Rival: Surprisingly difficult! But love the concept and the graphics style. A relaxing music atmospher would have completed nicely the game maybe? Great job on the visual style and the original gameplay idea!