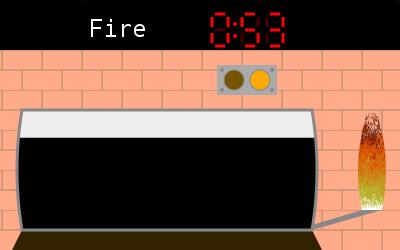 The Elementary Challenges consist in four mini-games, each one devoted to one of the classical elements. You have a total of 4:04 to complete them all. WebMonetization users get the chance to retry one of games if they took too long.

Details, including the controls for the games, are inside the game.

It is definitely possible to win the game both in easy and normal mode, both on desktop and mobile, even though the latter is a bit harder. And just in case you find the last Water puzzle in normal mode too hard: You can find the solution in "Amusements in Mathematics" by Henry Ernest Dudeney.

Christer Kaitila: wow those are fun and very difficult! the music was great, and I really liked the top gui progress bar that let me know how much longer I needed to survive for. the animated dialogue was a nice touch and gave it a lot of personality. all in all I'm ashamed to admit is was too hard for me but I loved every minute trying and failing =). Great work!

Nathan Lie: Simple theme, really liked the minigame concept. Controls were a little finicky for some games, and the music was a little repetitive. Still the idea of speeding up said music as time ran out was a good touch, and the Web Monetization bonus gave a nice edge.

Anselm Hook: Controls were a tiny bit complicated. Some scenes were unsolveable. I think the retry is a nice idea.

Ewa Mazur: The game is interesting - all 4 games are different but the whole game is consistent - nicely done! I like the way you implemented the refresh for Coil subscribers. And yes, the game is challenging :)

Jupiter Hadley: Clever idea! I like that there are four different games.